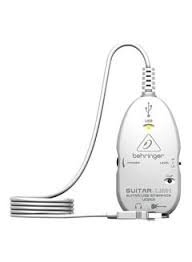 The GUITAR LINK UCG102 interface is an amazing practice tool that lets you hook up your guitar to your computer in a flash, giving you the best of both worlds.

The UCG102 guitar-to-USB interface lets you jam and record using modeling amps and effects without the need for any other gear but your guitar. The compact interface links your electric guitar to a PC or Mac computer via a typical USB cable, allowing you to rock with sophisticated software such as the included Guitar Combos Behringer Edition from Native Instruments, Kristal Audio Engine multi-track sequencer and Audacity audio editor. It also features a Headphone output for silent practicing.

Native Instruments Guitar Combos Behringer Edition* perfectly recreates 3 classic combos. The virtual tube combos have an absolutely authentic, dynamic and pure tone. (*Fully functional demo versions of all three combos are included on the CD. These all offer the same features as the full versions but will only run for the first 30 days after installation. You can use the included coupon ID to download the serial number to the GUITAR COMBO of your choice FOR FREE!)